There is 3 way of dealing with weight in D&D5 (open the “Using Each Ability” and read from “Lifting and Carrying”):

The thing is, unless you are using something that always compute the total weight of the stuff you are carrying it’s a hassle. What I don’t want in a weight system:

We define the notion of Lower Bound Carrying Capacity (LBCC) so that when you are over your LBCC you are also over your carrying capacity. Basically we are going to have two kind of items:

First let’s look at the minimum, maximum and median weight of items by category:

You can see that some of those things weight 600lb, we are going to remove everything 70lb or above from the dataset because they are obviously bulky and you don’t really need a rule for them.

Let’s see all that in a bubble graph with a log scale (btw, I couldn’t directly add a text label to the horizontal axes on google sheet, anybody knows if it’s possible?):

A few things that you can deduce from this chart to help you read it:

We can see that a lot of categories are either over or under 5lb, so that may be a good tipping point to declare something bulky ou our LBCC weight system:

We have 4 undecided categories:

There is one thing that I don’t like at this point: weapons are small and that’s typically the kind of thing that my players will carry a lot of. That is why we are going to introduce one exception to the rule: groups of any 4 weapons are bulky.

… which is ridiculous. And useless! So we’re going to have to rethink it.

Which gives us a nice geometrical 2, 4, 8 progression.

Also to avoid carrying character carrying an absurd number of of weapon let’s say that groups of any 2 (previously it was 4) weapons makes a bulk.

The updated rules for our Moderately Easy Weight System (MEWS) are:

With 30 bulks our 10 strength wizard can now carry:

Which is much more reasonable. The last example is ok for a wizards that is coming back from exploring a dungeon with some loot.

With the MEWS variant encumbrance rule:

These rules are more complicated than I would like but they have the advantage of using simple numbers and being possible to learn. Which mean that, with time, the GM and the players should be able to use them without thinking about it too much.

What I would like to do now is building an inventory sheet that makes counting weight easier, maybe a sheet with the 6 rules on top and a table with blocks of 4 bulks with dashed lines every two bulk and dotted lines for the remaining lines. 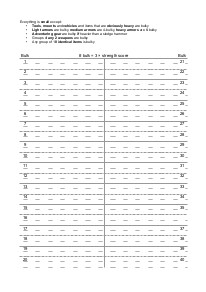 I didn’t test this system so all of this is entirely speculative.

As usual, the data I computed in this post are available in ods format.